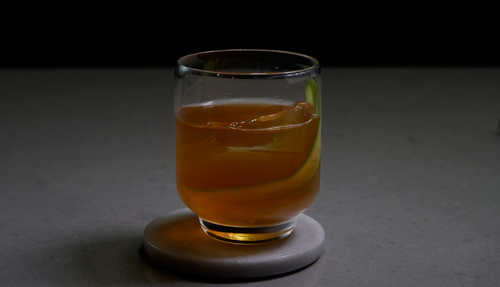 Gefion, sometimes spelled Gefjon or Gefjun, is a norse goddess associated with the plow and harvest. Folklore credits Gefion with the formation of the island of Zealand—one of the most fertile places in Denmark—by plowing away mainland that would fill with water and become lake Mälaren. This cocktail, which shares a name with the goddess, was created by Selma Slabiak, head bartender at Nordic restaurant Aska and it’s basement bar, Edda. In her book Spirit of the North Slabiak writes that “the ingredients in this drink pay homage to Gefion by using two grain spirits, the warmth of the amaro and honey syrup.” Warmth is a key player in this drink as the tandem base spirits propel forward a savory-sweet mixture not too distant from the classic gold rush, but with spicy and herbal elements that add intrigue and dimension. Slabiak suggests this drink after a long day, and we couldn’t agree more; each time we try it, we are impressed by the effortless complexity it doles out. Though the spicy elements were an early seller, the star of this show is the twin bases, particularly how the aquavit flatters the rye. As an added bonus, a long slice of cucumber makes for an unexpected and showstopping garnish, especially when twisted around the drinks orangish-red body.

This recipe requests Linie aquavit specifically, which is a cask matured version of the famous Norwegian spirit. Linie is much mellower than other variations of aquavit, and this specification likely contributes to the excellent support it gives the rye. That said, for many home bartenders two bottles of aquavit is one too many, and we certainly think this drink could work with a more typical clear variety; just consider going easy on it, as the herbal flavors of lighter variations are usually sharper. Don’t skip the cucumber, as it makes a significant contribution to aromatics and adds surprise and dimension. It would not be the same drink without it. Small scale Persian cucumbers work well. The original recipe calls for the drink to be served up, but we thought the workaday personality of the drink fit nicely over one large cube. Finally, the author notes that infusing the honey with herbs like rosemary and heather adds a nice touch: something we haven’t tried but certainly intend to.