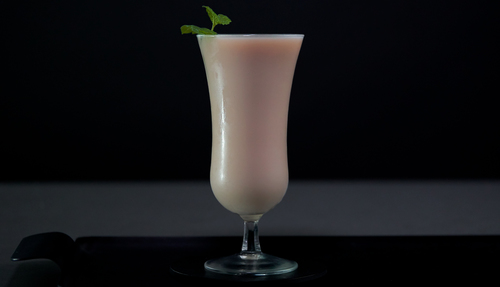 Since it will undoubtedly come up, let's address the matter on the tip of everyone's tongue first: no, our grasshopper isn’t green, and yes, the drink was named after the variety of insect that blends in with grass, not flamingos or cotton candy. There will be more on this subject briefly, so if your underpants are in a wad, feel free to skim forward. For everyone else, let's step back and dive into a little history. French Quarter mainstay Tujague’s claims ownership of the original Grasshopper or—more specifically—that Philibert Guichet created the drink during his tenure as owner of the restaurant while at a mixing competition in 1919. As is the case with many cocktails, much of this history is lore, but the bar and family do stand by the claim, and of course continue to sell grasshoppers by the boatload.

The grasshopper is a dessert drink, and is often derided as being for children, grandparents, or the childhood memories of grandparents. That last one seems like a joke, but it isn't: the current owner of Tujague’s mentions this specifically in an article for Eater. All of that said, with the proper ingredients, we have found this to simply not be the case. Yes, this drink has enough sugar in it to power an ant farm for years, but the bracing intensity of the mint, combined with the complexity of a quality creme de cacao, really makes for an unforgettable experience that can be appreciated by almost anybody, regardless of personal taste. The drink is big, balanced, and—even without the ice cream that some recipes call for—satisfyingly thick, cold, and creamy. Is it one step away from adult chocolate milk? Yes. Would we drink this all the time? No. But we can see why this drink, first brought back into light by Jeffrey Morgenthaler’s inspiring remix in 2013, is starting to see a legitimate renaissance,

The recipe selected here is adapted from a version printed in the awesome Meehan’s Bartender Manual. Our recipe makes a few alterations to bring the drink closer to home; most notably we omit the 8oz of Häagen-Dazs ice cream requested, as well as the single drop of green food coloring that gives the drink it’s famous hue. Originally, the green color came from cheap versions of creme de menthe colored with artificial additives. Bartenders have revived the drink with higher quality liqueurs produced by companies like Tempus Fugit and Giffard, but these producers smartly drop the unnatural coloring in their versions. There is nothing wrong with putting food coloring in a drink, and we certainly won’t judge you for adding some, but we've never used food coloring before, and aren't really inclined to begin on a drink that already looks like a milkshake. Besides, the grasshopper wears pink pretty well, and everyone will forget about the color once they take a sip of this confectionary magician anyway.